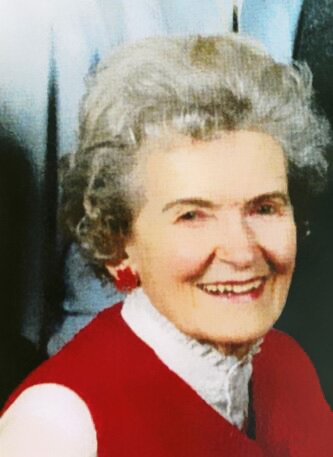 Friends and family grieve the passing of Ethel Louise (Clower) Barnes, born April 15, 1922 to Marguerite Ethel (Lang) Clower and Percy Pace Clower of Dallas, Texas. Her passing, on August 16, 2022, after 100 years and 4 months marked the end of her life on this earth.  However, her life story will not soon be forgotten by those whose lives she touched. She is one of the last of “America’s Greatest Generation.”

She was the first of 2 daughters born to the Clowers. She and her sister, Virginia Belle (Clower) Hughes (who died April 12, 2020) both went to local schools in Dallas, then to Baylor University in Waco, TX. Nobody was ever a stranger to Louise – she would talk to anybody, even on a wrong number call. We’ve been told that she was a social butterfly at Baylor, having multiple dates in a day. But she “caught” the one she wanted, her husband CJ, a “tall and handsome Californian with dark, curly hair” who was studying to become a Baptist minister. But World War II interrupted their plans. CJ became an Aviation Officer Candidate (AOC) and was called early from Baylor to Army Air Corps flight crew training where he was designated as a Navigator/Bombardier officer on B-24 Liberator bombers. They married in Dallas in February 1944, then CJ went to England in November with his bomber. They were married for 46 years.

When CJ returned home after the war in September 1945, she presented him with their 5-week-old son, Judson. 4 more children followed in the next 16 years: Elizabeth (Beth), Robert (Bob), Karen, and Bruce. CJ received his Baccalaureate Degree from Baylor and then graduated from the American Baptist Seminary of the West in California. He started a new Baptist church in a storefront in Culver City, CA in the late 40’s and Louise was right at his side doing whatever needed to be done. She played the piano, sang, taught Sunday School, and acted as Church Secretary.  Louise and CJ made a great team together and the church grew out of the storefront and into a new church building. There were 4 babies in 10 years – for the fourth baby, Karen, Louise had to stand up in the middle of CJ’s Easter Sunday sermon and leave for the delivery to the hospital with a friend driving her.

God opened the door for CJ to change his career during the Korean War. The brand-new Air Force contacted CJ to re-enter the Air Force as a bomber crewman. He countered that he had a brand-new church and couldn’t leave. They counter offered that the Air Force needed combat-experienced Chaplains even more than aircrewmen. After many prayers, Louise and CJ decided that God wanted them in the Air Force. 24 years later, CJ retired as a Protestant Chaplain with the rank of full Colonel in California. As an Air Force wife, Louise handled the logistics for living in 14 different houses at 13 different Air Force bases in Japan, Germany, Philippines, Alaska and 7 other U.S. States. She was cleaning cabinets in their new quarters in Alaska when she had to go to the hospital for her fifth child, but not before she did up the ponytail of the fourth child (Karen)! The taxi driver just got her to the emergency room parking lot and, as the delivery rooms were all full, she delivered the child (Bruce) by herself on a gurney in the hospital corridor.

Raising 5 kids, Louise had to be very frugal. She bought Christmas gifts throughout the year on sale (and sometimes forgot which kid got what) and there was no wrapping paper – everything was covered by sheets under the Xmas tree.  She sewed clothes for herself and her 2 daughters, often coordinating matching dresses. She mixed powdered milk into empty milk cartons (didn’t get away with it very often) to stretch the family food budget. She went to beauty schools to get her hair done by students once a week (one of her few vanities). She had a propensity for losing track of her kids – the boys often “just wandered away” and she once left one daughter (Beth) in a church nursery and another daughter (Karen) in the playground near the commissary. 6 year old Karen walked home by herself half a mile and was greeted at the door by her Mom with “Where have you been?”

Louise gave all her kids the gifts (not always wholly appreciated) of piano lessons with daily practices (we always had a piano in the house), singing in the Children’s Choir, and typing lessons and practices on her ancient typewriter (which is why we’re all proficient on keyboards today). Bob is still singing in a church choir. Even though she ate the leftovers and parts that no one wanted, she watched her weight religiously and bemoaned even two extra pounds. As a result, Louise was able to recycle her wardrobe over a 50-year span, depending on the current fashions. She loved her Filipino dresses from the 70’s most of all, wore them to children’s weddings, and will be buried in one.

Louise loved the travel opportunities being an Air Force spouse afforded. She missed out on climbing Mt. Fuji in Japan, baby-sitting Bob and Karen at the hotel; CJ made it to the top with Jud and Beth (who was in a basket on the back of a porter). She took her first Cruise on an Army transport carrying dependents back from Japan to California in 1957. She took her first long RV trip (5000 miles) in a station wagon hauling a trailer from Anchorage, AK, to Colorado Springs, CO in 1964. She loved traveling, seeing all of the sights, and when in a museum read ALL of the signs and displays, much to the chagrin of her kids, who tired easily, and by then just wanted ice cream treats.  She made diaries of all of her trips, complete with cutouts and pictures, so she could recall everything in the future and left these mementos for her family to cherish.

As her kids got older and moved out of the house, CJ golfed and Louise took up softball in the Air Base leagues, starting in her 50’s.  She also utilized her English degree from Baylor as a substitute teacher. She jogged a lot, and in Chico, CA, in her 60’s and 70’s, she did 13-mile half-marathons.  She was once first in her age group even though it took her 4 hours to finish.  After CJ died in 1990, she took up square-dancing but eventually had to stop due to a lack of skilled male partners.

Louise’s kids provided her with daughters-in-law, a son-in law, and grandchildren: Jud (died 2010) and TaePun and daughter Katie, Beth (died 1993), Bob and Trisha (died 2004) and daughters Kim, Kelly, and Kara and Bob’s second wife Mary Jo (wed 2007), Karen and Tom Colburn, and Bruce and Cindy and son Charles.  There are 4 great-grandchildren with one on the way.

Louise was very active in Chico First Baptist Church, having been a member since 1979 until her departure for San Jose, CA, in 2007, doing whatever needed doing, including teaching Sunday School and playing the piano.  In San Jose, Louise lived in a small house across the street from Bruce for a couple of years, before moving into Bruce’s homes for several more years and finally moved into an Assisted Living Facility a half-mile away from Bruce.  She remained a vibrant part of his family throughout the remainder of her life as dementia slowly stole her away.

Louise achieved her goal of a hundred years old on Easter 2022, as she had always threatened us kids she would.  All living sons and daughter and/or their spouses (Bob; Karen and Tom;  Bruce and Cindy; Jud’s spouse: TaePun), her grandchildren and great-grandchildren got to visit with her in April and received “hand-squeezes” that let us know she recognized us, even though she could no longer talk.  Louise loved her Lord and never failed to share her faith.  She lived her life as a disciple of Christ.  She was loving, generous, thankful, and humble.  May we so live to enjoy that day when the Lord says to us, “Well done, good and faithful servant; You have been faithful over a few things, I will make you ruler over many things.  Enter into the joy of your Lord.” Matthew 25:23.

To send flowers to the family or plant a tree in memory of Ethel Barnes, please visit Tribute Store
Tuesday
13
September

Share Your Memory of
Ethel
Upload Your Memory View All Memories
Be the first to upload a memory!
Share A Memory
Send Flowers